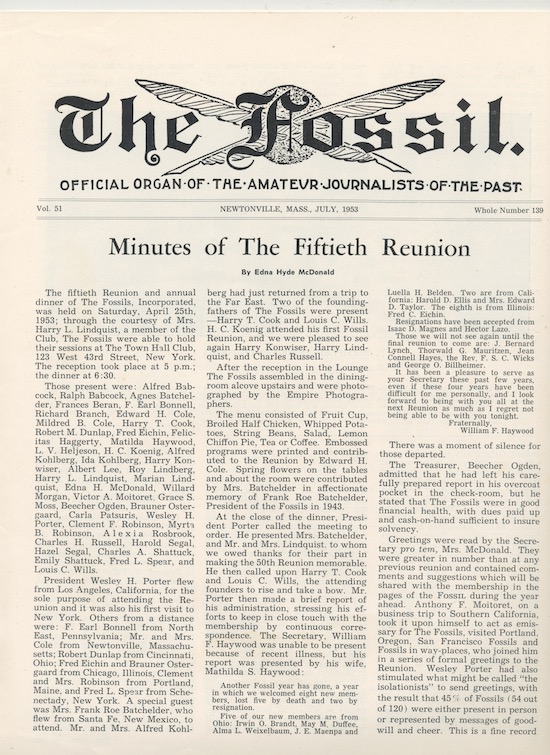 Herman C. Koenig was an avid collector of supernatural fiction and horror books, long before it was an established pastime; it was Koenig who introduced H.P. Lovecraft to the more serious of Hodgson's fiction—The House on the Borderland, and The Night Land, which prompted HPL to append Hodgson to his ever essay—Supernatural Fiction in Literature. In his article entitled, "Notes on Literary Defectives" (read Detectives). for this issue of THE FOSSIL, Koenig explores bibliographical anecdotes which sparked famous works of fantastic fiction—"the Bronte sisters were influenced and inspired by the works of that 'forgotten creator of ghosts', Joseph Sheridan Le Fanu," and that Poe's, "Arthur Gordon Pym" was inspired by 'Syhmzonia, A Voyage of Discovery," written by Captain Adam Seaborn, published in 1820. Of especial interest is an article entitled, ''Modern Mythological Fiction," by Robert Butman, whom Koenig notes, "Theosophy appears in many of H.P. Lovecraft's works, and that the 'Cthulhu Mythos' which runs through so much of Lovecraft's writings is very closely linked to the doctorines of Thesophy. The parallels between the ancient races mentioned and invented by Blavatsky and Lovecraft are startling." Bedsheet sized, unfolded. From the Hyman Bradofsky collection.