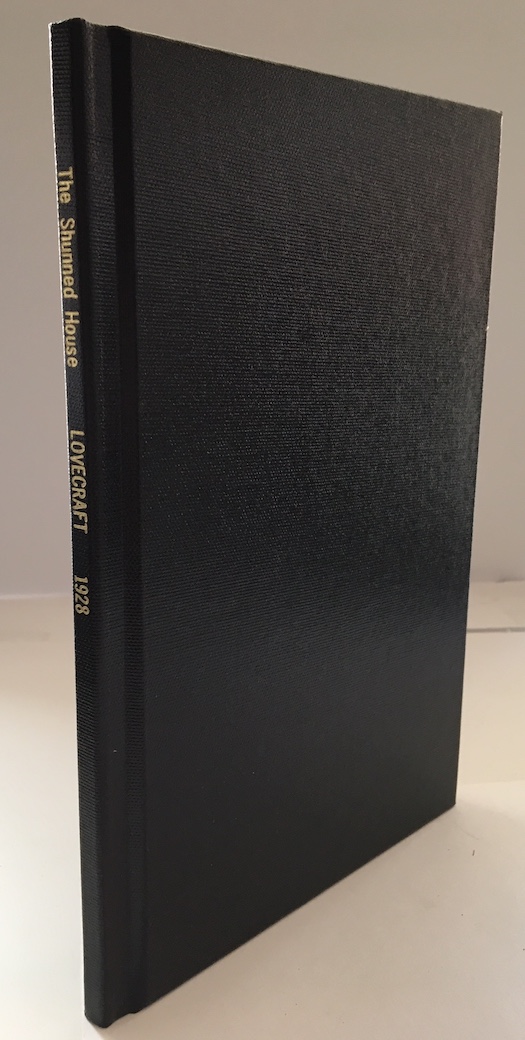 "Probably the oddest book ever published by Arkham House was the 100 copy hardcover edition of THE SHUNNED HOUSE," declared my late friend, Robert Weinberg—noted author, bookman and collector par excellance, in his introduction to this volume. To very briefly summarize what he meant: HPL's friend, W. Paul Cook, was to print and bind the story—THE SHUNNED HOUSE, and publish it under his, THE RECLUSE PRESS. Unfortunately Cook's wife died, he had to move himself and his printing equipment and the book was printed but never bound. Copies were passed on to HPL's young protege, Robert H. Barlow who bound a few copies. After Barlow's death, copies ended up with August Derleth of Arkham House who sold a few unbound copies then following the suggestion of another bookman—Bob Peeples, and bound 100 copies without d.j., selling them as an Arkham House book. Now that is a somewhat convoluted tale, but in amateur publishing, partially completed or abandoned projects are more common than not. What IS perhaps the oddest book ever published is this one: When Robert Weinberg was going through Arkham House materials in Sauk City, he turned up a number of broken or incomplete copies of the original Cook printed sheets. Bob got the idea to reprint THE SHUNNED HOUSE in a facsimile edition, with 17 copies published with the original sheets tucked in, and 50 additional copies, totalling 67 copies. Why 50 copies when the original hardcover edition was 100? Ya got me. When word got out about the 50 copy edition there must've been a howling outcry from AH collectors and it was decided to print an additional 50 copies bringing the total to 100 "regular copies" to match the original AH hardbound edition of 100, which did make some sense. BUT, what we are left with then, are THREE different states of this edition: 17 copies issued with the sheets, lettered A-Q, 50 numbered copies, and an additional edition of 50 copies with an entirely NEW limitation page stating the entirety of the edition at 117 copies! THIS edition in my opinion, is the ODDEST book ever published, and if you think you had a complete Arkham House collection, I got news for you! This is the second state of 100 numbered copies. WHEW!